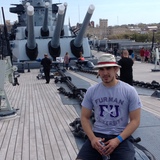 2 1
Jose Enamorado
Updated over 5 years ago

The shaping through trials and tribulations.

Ever since I was four, I wanted to be a professional soccer player. The tens of thousands of people chanting to exhibit their profound passion for the game and their team, the work, and the game itself brought me an incomparable joy. Playing soccer was all that made me happy. I loved every aspect of it; dieting, training, traveling, and the life-long connections I made throughout my youth. I carried out a very strict discipline through both middle and high school.

I always gave importance to my academics and thought myself to be pretty intelligent. I could do just as well as some of the top students in my grade, and sometimes better. I never really thought about anything else I could do as a profession other than soccer; I couldn't imagine anything else that would make me happier. Happiness held a higher priority for me than any amount of money. But nonetheless, I still strived to do well in school because it was rewarding for me to see good grades on my report card and it let me know that even though I was not as privileged as other students in economic aspects, I could still be put in the same bracket as them academically. But in seventh grade, my older brother, who was a junior in high school at the time, told me something that stuck with me for the years to come. He said "Why should we work our asses off, when there's no reward at the end. We can't go to college. We can't afford college. And we can't even work legally." Wow. Optimism turned to cynicism in a matter of seconds. Maybe I looked up to my older brother too much and should have thought for myself. Like I said; I was in seventh grade. My hopes fell off even more when I received a letter of deportation the following year in eighth grade. Now I really saw no purpose to dedicate myself to my studies.

Fast forward two years through litigation and court hearings, it was my junior year in high school. I was an average student with a couple of A's and B's with a few C's here and there. Grades were not much of a priority for me. After almost being deported, I really found no reason to continue dedicating an extensive amount of time to my studies. Fortunately, DACA came around. Instead, I put in all my time to soccer. Things were going pretty well too! I was in communications with a couple of colleges starting the recruiting process. That spring however changed everything.

I was looking to make that top team for the club I played for. I was confident I would make it. Everyone told me so. No. They gave the spot to a kid who showed up on the last day (third day) of tryouts because his mom put in a good word with the coach. I won't get into the politics of club soccer in the United States, but everyone and I knew this was a mistake. Simply put, If I did not play with this team, I would not get the exposure needed to play at the next level and make my dreams a reality.

So here I was, cut from the top team that I deserved to be on. What I trained for years in advanced. I waited three long years to get my chance, only for my talent to be unnoticed thanks to a prearranged agreement. What was even worse, my grades were not good enough to get into schools that would give me enough funding. I was definitely not going to win a big scholarship. And I was definitely not going to get recruited. What Now? That is the only thought that went through my mind during graduation. No clue where I would go to college. If I went to community college, where could I go after that? Will I get a well-paying job to support my family in the future? Will I be another statistic casted out from the rest of society? Only time would tell.

I received DACA my junior year in high school in 2013. I had no idea how that would impact applying to college. Also something I didn't think of until the time came. Sitting here now writing this story, I can tell you that not a day goes by where I don’t think "what if I never listened to my brother?" "What if someone told me that I could still go to college even though I was poor and undocumented?" "What if I had tried harder in my studies?" My life is a giant "What if?" I'm sure I am not alone. I also could have had it worse. I am aware that there is a poor soul out there to whom my troubles seem petty. I am very fortunate to still have been able to go to community college and get a second chance to get serious about my academics. And that is what brings me here today. To you.

The worker’s mentality of a Hispanic is a double edge sword. Generally speaking, Hispanics are some of the hardest working people. There is no question about that. My parents worked day and night for years, even until today, to give me that life they could only dream of. We will do anything to make ends meet. At the same time however, that same mentality can leave us unprepared for the future. It’s the same mentality that leaves our parents working until we can take care of them. It’s the reason why It lets us think in the here and now, and not too much down the road.

It was this past year where I came to a realization; knowledge holds the key to a better life. Knowledge is the most useful tool anyone can have. And it is that belief that has led me to invest in my education more than anything. College is more than a price tag. It is a step to a better life. This is who we are. We are here to tell you, there are options available for students like you. You can go to college. You can get a great job. You can support your family with more with than what they could ever wish for. You can do anything. Never let optimism put you down. I know times may get tough and you sometimes feel like quitting. Success does not come easy. I once heard that “struggle and criticism are prerequisites of success.” You have come so far already. Why stop now? We are Latinos. We work until we accomplish what we set out to do. We keep going from there. Todo lo que necesitamos es voluntad . Porque cuando hay voluntad , hay un camino. Aquí es donde soñamos. This is Where We Dream.